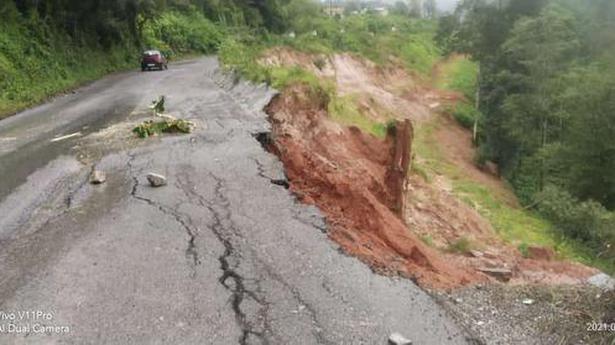 
Following overnight rain, landslides have been reported on National Highway 75 near Donigal in Sakaleshpur taluk, Karnataka on July 22. Vehicular movement on the Bengaluru-Mangaluru highway has been hit.

Sakaleshpur tahsildar Jaikumar and other officers visited the spot around 7.30 am and took the decision to stop the movement of vehicles. Staff at the checkpost at Maranahalli were told to stop vehicles coming from Mangaluru.

“I appeal to motorists not to take the Shiradi Ghat route,” the tahsildar told mediapersons.

A section of Mangaluru-Bengaluru highway near Donigal in Sakleshpur taluk that was damaged following heavy rain overnight on July 21-22, 2021.

In 2020, following heavy rains, a landslip had occurred on this stretch of the Shiradi Ghat. Online studies are spoiling the eyes of children fast The government told in Parliament – ​​11 percent of the total cases of corona in the country are in people below 20 years of age.