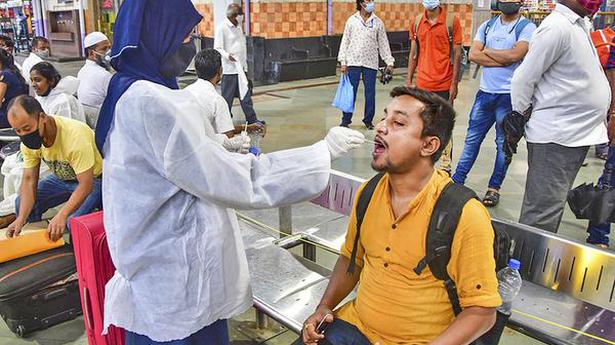 
Stressing that Maharashtra had never under-reported deaths during the pandemic, Health Minister Rajesh Tope on Wednesday clarified that the reconciliation of more than 3,500 deaths (carried out by health authorities till July 12) was primarily because private hospitals often failed to give real-time data pertaining to fatalities and cases to State health officials and upload the same information on the Centre’s portal.

“Right from the start of the pandemic, I, along with divisional commissioners and district collectors, have been urging hospitals to provide real-time information of fatalities and upload them on the Centre’s portal…but this has not been happening regularly and there is a delay of a week or two in uploading the requisite information. However, we have been regularly reconciling this data and there is no question of hiding anything,” said Mr. Tope, in an interview to a vernacular channel.

On Tuesday, the State’s Health Department added 3,509 deaths and 2,479 cases to the cumulative tally.

The Health Minister further said that going by the overall decline in cases in the last few weeks, the State government would consider further easing restrictions subject to the decision of the Chief Minister and suggestions of the State’s COVID-19 taskforce of doctors.

Mr. Tope, however, warned that a ‘third wave’ of the pandemic could be imminent if the public strictly failed to follow COVID-19 appropriate behaviour.

Meanwhile, after seeing a decline in cases in the last couple of days, Maharashtra’s recoveries dipped on Wednesday with the State reporting 8,159 new COVID-19 cases against 7,839 recoveries causing the active case tally to rise marginally to 94,745.

A total of 165 deaths in the last week have pushed the State’s cumulative fatalities to 1,30,918 with the case fatality rate standing at 2.09%.

“Of a total 4,60,68,435 laboratory samples tested thus far, 62,37,755 (with the average case positivity falling incrementally to 13.54%) have returned positive with over 2.12 lakh samples being tested in the last 24 hours,” State Surveillance Officer Dr. Pradeep Awate said. Both Center and State would do everything for flood-hit Maharashtra: Narayan Rane

Calicut varsity all set for admissions