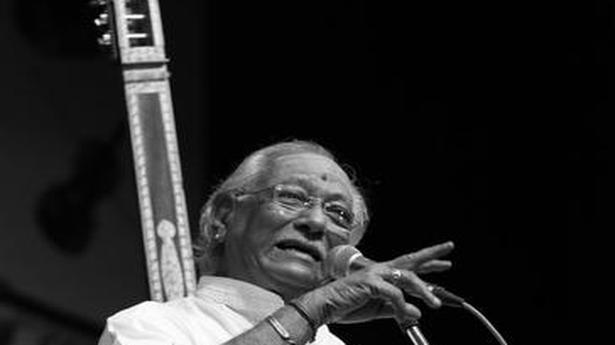 Gopalakrishnan was barely eight when legendary Carnatic vocalist Chembai Vaidyanatha Bhagavathar asked him to accompany him on the mridangam at a concert in Thripunithura in central Kerala in 1940. His father, hailing from a family that had been palace musicians for two centuries, was obviously reluctant, thinking that Gopalakrishnan was too inexperienced to play with a musician of Chembai’s calibre. But Chembai insisted. Although there was another mridangist on stage, at the pallavi, Chembai asked Gopalakrishnan to take over. And the boy fearlessly played a four-kalai pallavi without a stutter.

Chembai was impressed and asked Gopalakrishnan’s father to send him to Chennai to pursue a career in music, but his father wanted him to finish his studies first. The boy stayed back but played for the veteran musician whenever he came to town. Under Chembai’s wings, he blossomed not only on the mridangam, but also in vocal music. By the time he was 14, he was performing vocal concerts too. And it was a few more years before he joined Chembai in Chennai.

What followed was a remarkable career and the emergence of an institution in his own right. Dr. Tripunithura Viswanathan Gopalakrishnan, fondly called TVG, has traversed different genres and forms, and, perhaps most importantly, is an inclusive and secular teacher who has created a legacy that’s held aloft by top-class musicians ranging from Ilaiyaraja and AR Rahman to Ghatam V. Suresh and violinist S. Varadarajan.

As he turns 89 today, it’s hard to summarize his career: an excellent mridangam exponent who has accompanied stalwarts; a vocalist who sang in both the Carnatic and Hindustani styles; a scholar and composer; a cross-over star who shared the stage with the likes of George Harrison, Dave Brubeck, and Pt. Ravi Shankar; and, above all, an astute talent-spotter and mentor. “What makes him stand tall is his openness to all genres, his allegiance to aesthetics, and his innate passion to share knowledge,” says Devie Neithiyar, singer and disciple, who manages the TVG Academy of Music and Arts.

Varadarajan says that but for TVG, he wouldn’t have become the musician that he is today. “A transformation happened when I started learning from TVG sir in 1987. New perspectives, techniques, and a deeper understanding of all aspects of music and performance. Under TVG, I was not just learning the violin, but music in its totality.”

“Music is everything for me. The most occupying thing in my mind. Everything I do is an extension of my music,” says TVG. In the Carnatic world, that can often be an exclusive socio-cultural ecosystem, TVG is an exception. Nobody else has democratised access to Carnatic music as he has over the last many decades. “I want more people to learn. Music is cosmopolitan. It’s for everyone, every occasion.”

Although deeply entrenched in classical music, TVG doesn’t take sides. “What is classical? Classical means there should be grammar and tradition. That it should conform to some form.”

But doesn’t he think there is something that is still pulling Carnatic music backwards, keeping it from being more contemporary? That even some highly skilled young musicians are bogged down by ‘tradition’? Why, for example, should there be so much affected voice mannerisms when straighter notes sound more pleasing?

“Some don’t identify the difference between mannerisms and music. Some think that it becomes Carnatic music only if they sing with the mannerisms. Many connoisseurs also like Carnatic music to be on the beaten track. But singers should realise that after 50, the body starts protesting; by 60, their ability to express what they want declines, and the music that they developed with mannerisms will also fail to express itself. There will be problems with sruti and stamina. In fact, when one sings sudhaswarams, it sounds smooth, but many people are used to music with mannerisms. Unfortunately, for about 90%, Carnatic music is nostalgia, as if what I heard and what I know is my benchmark,” says TVG.

When teaching, how does he ensure that his disciples explore and pursue more sudhaswarams rather than drowning in mannerisms? “During phonation, nothing should move except the vocal cords, the necessary mechanism for making sound. That’s how singers like SP Balasubramaniam, S. Janaki and Parveen Sultana sang. Clarity, pitch accuracy, vowel movement shouldn’t suffer because of mannerisms. In music, the vowels carry the sound. If you sing like that, music will be easy on the ears. The same with instruments too — if you play without mannerisms it will sound good. Tradition doesn’t mean it should sound old.”

He adds, “Madurai Mani Iyer’s concerts used to draw large crowds. His music was 100% pitch perfect and in delectable layam. All living things respond to purity of tone and rhythm because that’s basic. But this purity shouldn’t be misunderstood as conservatism.”

TVG also doesn’t subscribe to the idea of ​​good and bad voices. “Voice is a singer’s identity. But the main problem is that some people imitate. Some tend to sing like their teachers, and the teacher’s responsibility is to prevent them from doing that.”

In TVG’s world, Carnatic music is universal, with unparalleled depth and diversity. “It’s so panoramic. Endless forms, endless repertoire, widely assembled and analyzed rhythms, stunning aesthetics, and so many languages. No other music in the world has so many languages. It’s all-encompassing and very structured. Our rhythm is measured to infinity. Carnatic rhythms are the most evolved and refined,” he says.

Does one need to be mathematically oriented to be a mridangist? “No. Carnatic rhythm is only arithmetic.” So can people who are poor in mathematics play the mridangam? “Why not,” he replies. Ghatam V. Suresh, one of his foremost disciples, says that his guru believes that layam cannot be cramped within some highbrow mathematical calculations, which can most aid a performance. “He insists instead that the nada from each stroke on the instrument has an emotional connect with the listener, the perpetuation of which makes someone a true musician.”

TVG founded his academy to take music to everyone, particularly those from underprivileged backgrounds, and also to train teachers in the TVG training method to build, repair and free both vocalists and instrumentalists. “Every person should have music in their life. If you can speak, you should sing,” says TVG. And that epitomises his art and practice.