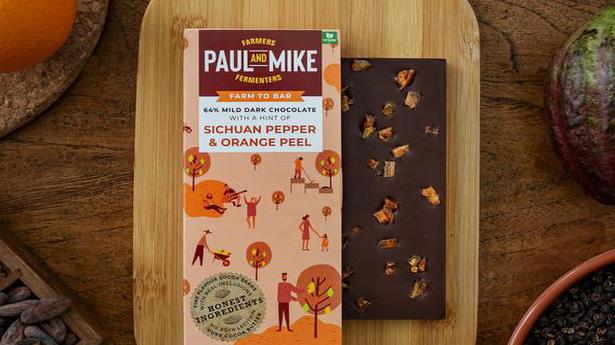 Paul and Mike, an artisanal chocolate brand based in Kerala, is the first Indian brand to have come this far

Paul and Mike, an artisanal Kerala-based ‘bean to bar’ chocolate maker is savoring the taste of success. It has become the first Indian company to win a silver in the International Chocolate Awards (2020-2021 world final) for its ’64 Percent Dark Sichuan Pepper and Orange Peel Vegan Chocolate’.

“We have been experimenting with flavors and this particular variant was targeted at the Chinese market. As Sichuan pepper is widely used in Chinese and South-East Asian cuisine, we thought this variant would be ideal for their palate. The chocolate is vegan. Candied orange peel is used to add texture,” explains Vikas Temani, business head and founder of Paul and Mike.

Paul and Mike launched the award-winning chocolate in May 2019. When company executives visited the International Chocolate fair in Shanghai in December 2019, they introduced this particular variety and it was sold out within days. They found that the hot-and-sweet blend was doing well in the Indian market too.

“The chocolate has heat and sweetness. It produces a tingling sensation on the tongue and people enjoy that. A bar costs ₹250. Right from inception, our idea was to sell fine, artisanal chocolate at affordable prices. Even mass produced popular European brands cost more,” Vikas says.

Paul and Mike, artisanal chocolates from Kerala, have flavors that are popular in India such as thandai, mango and custard apple | Photo Credit:
special arrangement

The ‘bean to bar’ chocolate makers have been winning bronze awards at the Asia Pacific finals and had been sending their product to the world finals for the last two years.

What’s in the name

The name of the brand has an interesting story behind it. Fine flavor cocoa comes from South America while Africa is the largest producer of bulk grade cocoa. To understand the farming and fermentation of fine cocoa, a team had visited a few South American countries about four years ago.

Paul and Mike, artisanal chocolates from Kerala, is a ‘bean to bar’ company that sources cocoa from select farmers in Kerala and Andhra Pradesh | Photo Credit:
special arrangement

“We met several farmers and fermenters there and they gave us the confidence that Kerala would be ideal to grow fine cocoa. Among them were Paul and Mike, two friendly farmers who went out of the way to help us understand the process and how to get the best from the cocoa beans. We decided to name the brand ‘Paul and Mike’ in their honour. Moreover, customer feedback proved that the name struck a chord with them,” says Vikas.

Cocoa is dried and fermented on Paul And Mike’s farms in Kochi and Coimbatore. In addition, wet cocoa is sourced from select farmers in Kerala and Andhra Pradesh and only real fruits, nuts, spices and floral distillates are used in the chocolates. “Since we are backed by Synthite, a natural food ingredients company, we get the best spices and natural extracts for our chocolates.”

Paul and Mike also have a wide variety of flavors for the Indian consumer such as Indian Style Thandai, Peppermint Gelato, Sitaphal (custard apple), Jamun (java plum), Alphonso Mango and so on.

“Jaggery, for instance, is sourced from two brothers in Pune who approached us for new options in jaggery. They wanted to know if we could develop a chocolate with jaggery. In the same way, we decided that we would use Indian fruits such as jamun, mango, custard apple, and rasbhari (golden berry) instead of blueberry, cranberry and so on. In fact, for many Indian customers, these were the first variants of Paul and Mike that they bought. Thandai, which is popular in North India, reached the market during Holi last year and was a huge success,” says Vikas.

The three-year old company has 36 varieties of chocolates in the market and is planning to widen the consumer base of the brand with 100 varieties this year.