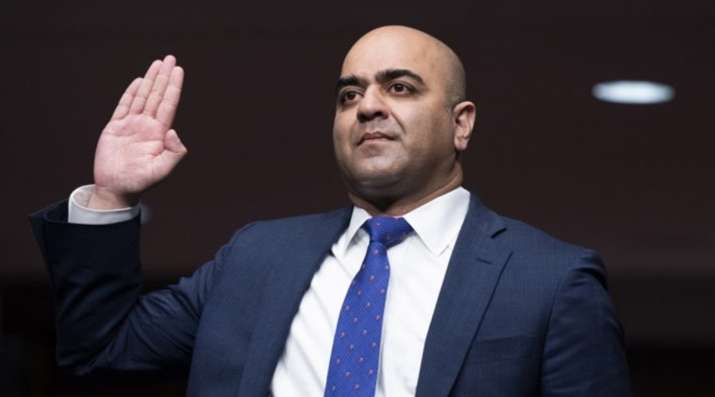 The US Senate has approved the historic nomination of Pakistani-American Zahid Quraishi to the District Court in New Jersey, making him the first Muslim federal judge in the country’s history. The Senate voted 81-16 on Thursday to confirm Quraishi, 46. As many as 34 Republicans joined the Democrats in confirming the first-ever Muslim-American as a federal judge.

Currently, a magistrate judge for the District of New Jersey, Quraishi would now make history when he will be sworn in as the Judge of the US District Court of New Jersey. “Judge Quraishi has devoted his career to serving our country, and his story embodies both the rich diversity of New Jersey and the promise of America as a place where anything is possible,” said Senator Robert Menendez during a speech on the Senate floor before the confirmation vote.

Menendez is chairman of the Senate Foreign Relations Committee. “Zahid Quraishi is a man of integrity, a consummate public servant, and a trailblazer for Asian-Americans and Muslim-Americans across this country who dream of one day presiding over a court of their own,” he said. “We should all draw inspiration from his story because it is a story that could only take place in the United States of America,” Menendez said.

The US District Court of New Jersey is one of the busiest in the country, with 46,000 cases pending before it and with judges facing individual caseloads more than triple the national average. Quraishi was appointed as a US Magistrate Judge for the District of New Jersey in the Trenton Vicinage on June 3, 2019. Quraishi, who is of Pakistani ancestry, is the first Asian-American to serve on the federal bench in New Jersey.

“Judge Quraishi has devoted his career to serving our country, and his story embodies both the rich diversity of New Jersey and the promise of America as a place where anything is possible. He was born in New York and grew up in Fanwood, New Jersey with his parents, both immigrants from Pakistan who came to this country to build a better life,” Menendez said.

Before his appointment, he was Chair of Riker Danzig’s White Collar Criminal Defense and Investigations Group and his firm’s first Chief Diversity Officer.

Before joining Riker, Quraishi served as an Assistant US Attorney in the District of New Jersey for over five years. He previously represented the United States as an Assistant Chief Counsel and trial attorney with the US Department of Homeland Security. He also served as a military prosecutor and achieved the rank of Captain in the US Army Judge Advocate General’s (JAG) Corps.

The Muslim Public Affairs Council applauded this historic moment as Judge Quraishi is now the first American Muslim to serve as an Article III federal judge.

The Biden administration is fulfilling its promise to make the federal government more representative of the rich diversity of America, it said. “In the past few months, we have seen an American Muslim woman, Deputy Director of the National Economic Council Sameera Fazili, speak from the White House dais on economic policy,” the council said.

President Joe Biden has also nominated Dilawar Syed for the Small Business Administration and Lina Khan for the Federal Trade Commission. “Judge Zahid Quraishi’s confirmation is a hallmark in this new era of progress for American Muslims, breaking barriers by filling roles that have not been historically filled by Muslims,” ​​the statement said.